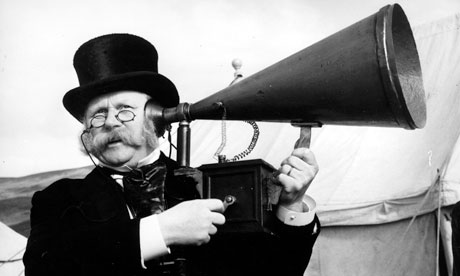 Can you imagine walking around with a cow’s horn stuck in your ear? How about, needing a hand truck to move your hearing aid around? If you hadn’t been lucky enough to be alive in the 21st century those would very likely have been possibilities. See how far we have come.

As early as the 1200s, people were trying to cope with hearing loss. They used hollowed out cow and ram’s horns to funnel sound into their ears as their hearing diminished. Later, in the early 1700s, the Ear Trumpet was developed. It wasn’t exactly a great technological leap but at least, being made of metal; it didn’t smell like a goat. Besides, until electricity was invented in the 1800s there weren’t any options on the market.

When Alexander Graham Bell invented the telephone in 1876 it signaled the birth of a new age in communications. For the sake of knowledge, Bell was actually trying to develop a hearing aid, not a phone. His mother was hard of hearing and he was hoping to help her. Many people soon discovered they could hear better with the telephone receiver pressed against their ears. There was no amplification but it gave people ideas to think on.

Thomas Edison, who suffered from hearing loss himself, developed the carbon transmitter in 1870. It only amplified sounds by 15 decibels (dB), only half what is necessary to help those with hearing impairments. However, it was a large step in the right direction and led to the development of the carbon hearing aids. These stayed in use from around 1902 until vacuum tube technology surpassed them.

By 1921 vacuum tubes had made it possible to amplify sounds by as much as 70 dB. There was one problem though; the units were the size of a small refrigerator. They weren’t exactly convenient to carry around.
Later the size was reduced to that of a shoe box, but it was still heavy and bulky to tote around.
It wasn’t until 1938 that Aurex introduced the first truly wearable hearing aid. It consisted of a battery pack strapped to the wearer’s leg, a receiver worn on their clothes and a wired earpiece. 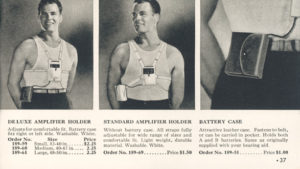 Technological advancements during WWII helped shrink the circuits down to pocket size and the batteries down to buttons. These units, marketed as discrete, were still wired and about the size of a pack of smokes.
It wasn’t until Bell Telephone Laboratories invented the transistor in 1948 and then Norman Krim at Raytheon developed the junction transistor in 1952 that things truly became compact.

The leaps and bounds that assistive listening devices have made since the advent of true electronics have been amazing. Analogy devices are now all but a thing of the past and hearing aids that can fit inside the ear canal have amazing capabilities. They can, distinguish between human speech and background noises, adapt to different listening environments and even connect with other electronic devices.
What will tomorrow hold? We’ll have to wait and hear.