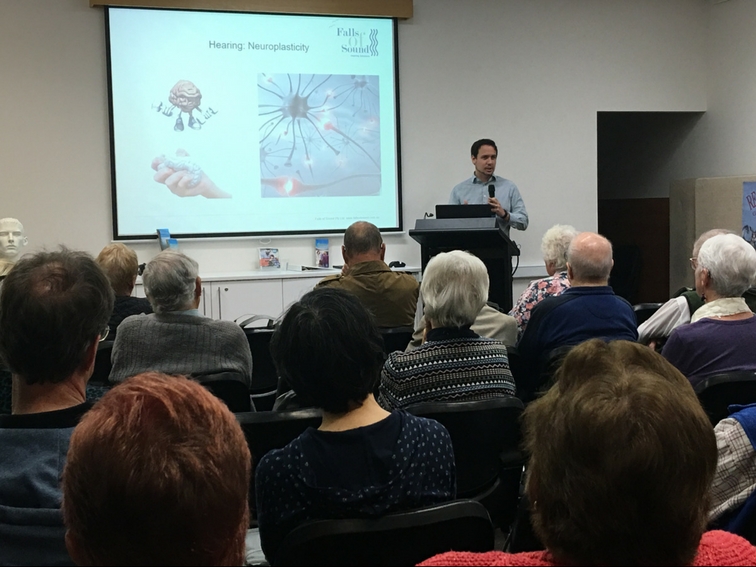 At Falls of Sound, we’ve made a conscious effort to grow hearing awareness through our speaker program and workshops.

Back in November, we hosted a free Tinnitus workshop at our Maroochydore and Indooroopilly clinics. These workshops wielded some interesting results and allowed us to get in touch with the silent sufferers of this irritating and degenerative condition. Tinnitus is a persistent ringing in the ears which can lead to a hearing loss – and as you may be aware if you have been following our earlier posts – the early onset of dementia.

As it is Tinnitus Week, we wish to share the following case studies which emerged from these clinics to demonstrate how Tinnitus affects the lives of sufferers and the possible treatment options available for this condition.

Robert attended a Tinnitus workshop at our Indooroopilly centre where it was explained to him what exactly Tinnitus is, the possible causes of Tinnitus, the myths around Tinnitus and the potential treatment options for the condition – including apps, hearing devices and psychological techniques such as mindfulness. Robert booked an appointment with us a short time later. It was revealed at his appointment that he suffers a unilateral (single-sided) hearing loss and would benefit from wearing a hearing device. He was fitted with a Sigia Pure 5PX hearing aid which has a feature that masks the ringing caused by his Tinnitus. This program produces a sound that mimics the sound of ocean wave. Robert has control over this program and can switch it on and off or increase or decrease the volume as he desires. He says the program masks the Tinnitus well and since we turned up the therapy signal at his follow up, he has also noticed an improvement in his hearing.

We met Adam at the Maroochydore workshop. He was experiencing difficulty sleeping due to his Tinnitus. It turns out Adam’s hearing was unaffected but he was struggling with following conversations – especially in crowds. For Adam, we recommended Siemens Orion 2 RIC hearing aids which can be easily turned off, switched to minimal amplification if required and contain an optional Tinnitus signal.

According to Adam, his Tinnitus has improved significantly and he is enjoying more regular sleep – even though he stops using the app before he even goes to bed.

Anne attended a free screening in Maroochydore after being referred from the Tinnitus workshop. She had been suffering from Tinnitus constantly bilaterally (both ears) for a good four or five years. Anne experienced both ringing and the sound of cicadas, but wasn’t particularly bothered by it – however, Anne does suffer from a mild to moderately severe hearing impairment. We counseled Anne on Tinnitus coping strategies and advised sound therapy. As she feels content managing on her own, she simply comes in once a year for her checkup knowing that we are here for her when she does require assistance.

Like Anne, Mary came to us for a free screening following attending the Tinnitus workshop in Maroochydore. She had been suffering from Tinnitus for five years bilaterally. Like Anne, her Tinnitus is not necessarily ringing in the ears but resembles a sound similar to cicadas. Her Tinnitus also varies in volume. She struggles with conversations in group situations, and when walking on the beach. Mary also started experiencing difficulty with her hearing five years ago. After a hearing assessment, no hearing devices were deemed necessary for Mary. Like Anne, she continues to visit us for her yearly check and we advised Tinnitus coping strategies and a sound therapy trial (with Tinnitus signals such as the ocean wave therapy signal Robert uses).

If you or someone you love is experiencing difficulty with Tinnitus, please contact us at either of our clinics for more information or to book a free screening.

*All names have been changed to protect the privacy of our clients.