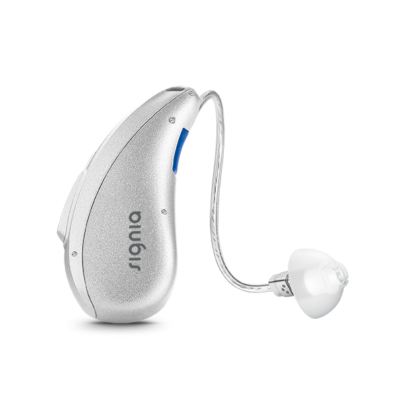 For the uninitiated, shopping for hearing aids can be a little intimidating at first. There are so many styles to choose from and options to consider, it can be very confusing. Among the most popular types available today are Receiver-In-Canal Hearing Aids or RICs. RICs are very similar to Behind-The-Ear Hearing Aids but offer many advantages.

The most obvious difference between a Behind-The-Ear Hearing Aid or BTE and an RIC is in how they are constructed. A BTE houses all of its components inside a case that is worn behind the ear. An RIC has its components separated into two separate sections. The microphone and amplifier rest behind the ear and the receiver or speaker is placed in the ear itself.

Advantages of a Receiver-In-Canal Hearing Aid

Separating the receiver, the microphone offers many advantages. RICs are much less likely to produce feedback and occlusion is much less of a problem. Also, since the ear canal is left open many wearers report a much more natural and full sound.

Another advantage that many RIC wearers appreciate is that by separating the two sections of the hearing aid, both can be made smaller. This makes the fact that they are wearing a hearing aid much less noticeable to friends and colleagues.

There is no single perfect hearing aid for every patient. Considering though, that the chief complaint about Receiver-In-Canal Hearing Aids is that they are so light they are easily lost. They would seem to be an ideal choice for those with light to moderate hearing loss.

For more information on Receiver-In-Canal Hearing Aids or any other solutions to hearing issues contact a ‘Falls of Sound Hearing Centre‘, near you. We are independent hearing specialists in the Brisbane and Sunshine Coast area.