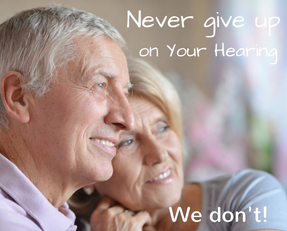 Mr. P was a client who didn’t regularly use his hearing aids. It wasn’t all his fault, though. They were over 5 years old and very sensitive to moisture. He is on medication that causes him to sweat and he constantly had to have his hearing aids repaired. As you can imagine, this was very frustrating for Mr. P, so he just gave up.

Mr. P may have given up, but we didn’t. Cynthia called him several times to try and get him to come in, without having any luck. Then I decided to give it a try. It took more than on call from me, but eventually I convinced him to give us another shot.

Today Mr. P came in for new batteries and went out his way to thank us for being persistent. He is loving his new hearing aids.

He told us, he has even been caught in the rain with them and had no problems. That would have never happened with his old devices.

And, besides being rugged, they are so comfortable that he has forgotten he had them in and accidentally worn them to bed. Best of all, though, the sound is such an improvement, he feels he can hear everything. He even shyly admitted to having great fun eavesdropping on other people’s conversations.

We’re so glad Mr. P finally gave in and gave hearing another shot. To quote our latest ad in the ‘Local Bulletin’, “At Falls of Sound we never give up on your hearing.” We hope you won’t either. If there is a solution to your hearing problems, we’ll find it.