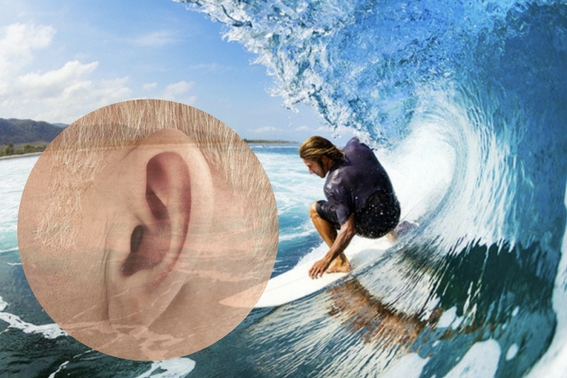 Surfer’s Ear or Exostosis, as it is technically referred to, is a very misunderstood condition. It gets its common name from the fact that surfers are the group that is most often affected by it. Because of that, most people assume that it is caused by summer time activities but that is far from the truth.

The reason surfers are at greater risk for developing Exostosis than most of the general public isn’t their summer passion. It is because even in warm weather their ears are constantly exposed to cold waters and strong winds. It is actually the cold and wind that causes surfer’s ear to develop.

The Mechanics of Surfer’s Ear

Exostosis is the body’s defensive mechanisms trying to protect the inner portion of the ear from a hostile environment. When the ear is attacked by cold and windy conditions on a regular basis, an outgrowth of bone develops, in the ear canal, as a protective barrier. Unfortunately, this also has the effect of blocking sound vibrations from entering the ear.

The same conditions that put surfers at risk for Exostosis exist for everyone during the winter months. That is why when the weather turns cold and damp, and the winds begin to blow it is important to protect your ears from Mother Nature’s wrath.

Some of the early warning signs of Surfer’s Ear that you can look for are water being easily trapped in the ear and difficult to remove. Also, if you suffer from frequent ear infections that can be a danger sign that Exostosis is developing.

The average person should only suffer 1-2 ear infections in their lifetime. More than that is a sign that a problem may be developing that could lead to hearing loss. In fact, The World Health Organization (WHO) list chronic ear infections as the number two acquired cause of hearing loss worldwide.

If you must be out in the winter’s chill, be sure to cover your ears. Wearing muffs, scarves and hats are a small price to pay for protecting your hearing.